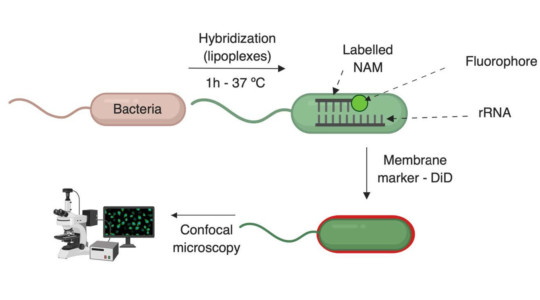 Treatment of septicaemia is threatened by the bacterial resistance to antibiotics. Nucleic acid mimics (NAMs) able to inhibit bacterial genes are emerging as an alternative to traditional antibiotics. However, NAMs cannot passively permeate the multi-layered bacterial envelope. Therefore, liposomes were considered as possible carriers to facilitate the internalization of NAMs in bacteria. Locked nucleic acids (LNA) and 2´-OMethylRNA (2´OMe) were evaluated as model NAMs and formulated into DOTAP-DOPE liposomes, forming lipoplexes. To improve the colloidal stability of the lipoplexes,  EGylated lipids (DSPE-PEG) were added to the formulation. We investigated the complexation and colloidal stability of these lipoplexes in human serum, which is of relevance in the context of intravenous administration. The potential of these lipoplexes to fuse with the envelope of Gram-negative and Grampositive bacteria and deliver the NAMs into the bacterial cytosol was then assessed. Fluorescence correlation spectroscopy (FCS) and nanoparticle tracking analysis were used to respectively study the complexation and colloidal stability of lipoplexes, with and without DSPE-PEG post-PEGylation, directly in human serum, over time. Thereafter, the interaction of liposomes with the cell envelope of Escherichia coli and Staphylococcus aureus was studied via a lipid mixing assay. Fluorescence in situ hybridization (FISH) and confocal laser scanning microscopy (CLSM) analysis then enabled the evaluation of the extent of NAMs internalization into the referred bacteria. Our data showed good complexation stability of the NAMs in the human serum for the PEGylated liposomes. Liposomes were able to fuse with both the Gram-negative and Gram-positive bacteria tested. Accordingly, the confocal images taken after the FISH assay demonstrated a successful internalization of the NAMs in both bacteria. We demonstrated that DOTAP-DOPE liposomes may fuse with both Gram-negative and Gram-positive bacteria and successfully deliver NAMs in both bacterial types. In addition, NAMs remain stably complexed within the lipoplexes even when incubated.

Sara S Pereira graduated in Biology at the University of Aveiro and holds a MSc in Microbiology from the same University. In 2017, she started her PhD fellowship on the “Targeted delivery of nucleic acid mimics into Escherichia coli and Staphylococcus aureus as a novel method for treatment of the infection” at the Associated Laboratory LEPABE in FEUP. Currently, she is enrolled on the 3rd year of the PDEQB doctoral program, under the supervision of Professor Nuno Azevedo from FEUP and Professor Stefaan De Smedt from Ghent University.

How rheology can improve the applications of smart fluids

Supercritical fluids: an alternative to the extraction of high-value products