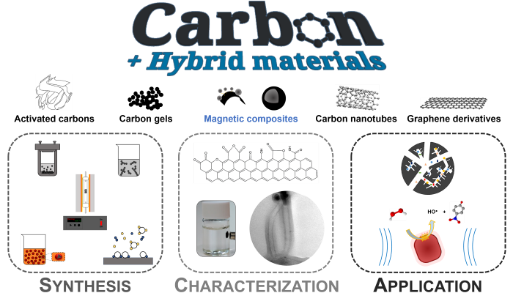 Carbon materials possess useful properties for several applications, such as: (i) stability in acidic/basic media; (ii) possibility to control, to some extent, the porosity and the surface chemistry; (iii) structural stability at high temperatures; and (iv) easy recovery of expensive metals (by burning away the support). Due to the high specific surface area, activated carbons have been traditionally used as adsorbents or as supports for metal catalysts; whereas graphitic materials having high conductivity can be used as catalysts by themselves. Materials with very different properties can be found between amorphous activated carbons and graphitic materials.

Carbon materials are commonly obtained by pyrolysis/thermal annealing of a carbon source. However, other synthesis techniques allow for a more accurate control of the properties of the resulting materials. These include sol-gel processes, hydrothermal/solvothermal and self-assembly methodologies, and chemical vapour deposition. Some of these techniques also allow synthesizing hybrid magnetic carbon nanocomposites. Two general classes of these type of hybrid materials are usually considered: (i) carbon nanostructures decorated with magnetic nanoparticles, in which the magnetic material is embedded or linked to the carbon structure, without being protected against the environment by a carbonaceous shell; and (ii) carbon encapsulated magnetic nanoparticles, which are core-shell structures with a carbonaceous shell and a core made of magnetic materials.

Textural, morphological, and surface chemistry properties can be characterized by different techniques, such as N2 physisorption, microscopy, and temperature programmed desorption coupled to a mass spectrometry detector (TPD-MS).

Carbon-based materials are a subject of intense research, with strong relevance in electronic, electromagnetic, electrochemical, environmental and biomedical applications.

In this lecture, different routes for the design of carbon-based materials based on properties such as dimensionality, crystallinity, texture and surface chemistry will be displayed under a personal perspective. An introduction to several synthesis and characterization techniques will be provided, as well as some application examples.

Dr Rui S. Ribeiro is currently a Researcher at Associate Laboratory LSRE-LCM, within the framework of project InSpeCt. He has been acquiring scientific expertise in the preparation, modification and characterization of nano- and macro-structured carbon-based materials for environmental applications.
Dr Ribeiro completed the Integrated Master in Biological Engineering in 2009, at University of Minho. In 2011, he joined LSRE-LCM as Research Fellow; and in 2014, he was awarded an Individual PhD Studentship by FCT – Fundação para a Ciência e a Tecnologia. Dr Ribeiro completed his PhD studies in the field of Chemical and Biological Engineering in July 2018, at FEUP.